Thank you for visiting SpiritualGiftsTest.com.  My name is Jeff Carver and I am a pastor in Southern California.  My wife Michelle and I have been happily married since 2003. We adopted our beautiful daughter, Mariah in 2017 and adopted her sweet baby brother Levi in 2020. I want to share our story with you so you can see how the Lord moved to transform each of us and eventually bring this website to where it is today. 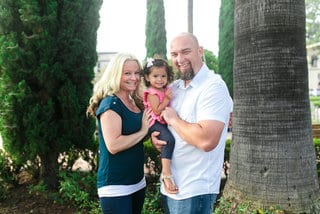 For four years before we married, Michelle and I were simply church attenders.  By God’s grace we were saved and we loved our church, but we just didn’t get involved or serve in any way.  During that time, I knew I had a calling to minister to God’s people, but I was unsure and afraid of what that meant in terms of changing the direction of my life.  You could say I had a bit of Jonah’s problem, without the whale!  It took a lot of closed doors, four changes of my college major, and four years of church attendance for me to figure out that I needed to be obedient to God’s call on my life.  (I was a bit slow to learn this lesson.)

After those years of “seat-warming,” we finally listened to the Lord who had been patiently calling us to get involved and serve Him in the church.  This meant going through a membership process and making a commitment to serve.  During this time we met many new friends who encouraged us and guided us along the way.  At about the sixth week we took a two-day class geared toward helping us discover our spiritual gifts.  We each took a test similar to those on our website and it opened our eyes and hearts to serving Jesus in the gifts that He has given us.  Shortly thereafter, we both began our life of ministry in the High School youth group and later served in Junior High ministry.

In 2008 I was blessed to earn my Masters Degree in Religion (M.A.R) from Liberty Theological Seminary.  Soon thereafter we followed the Lord’s call for us to plant a church here in Southern California.  I was ordained into the ministry and pastored our church plant for just over four years, until February of 2013.  Since then we have been in the process of expanding our family (we are adopting our daughter Mariah soon!), and I am concentrating on our church’s discipleship ministry. I also earned a Masters of Divinity in Theology from Liberty in 2016 and continue to develop tools for the church to use to equip the saints for ministry.

THE HISTORY OF SPIRITUALGIFTSTEST.COM (the short version)

In 2003, soon after we began to serve, the Lord placed on my heart the desire to create and freely distribute a spiritual gifts test online.  So I decided to teach myself enough HTML to be dangerous and put the test on our original website – ElevenTalents.com.

The name Eleven Talents came to me from the parable that Jesus taught in the Matthew 25:14-30 about the talents.  It is a parable about stewardship of the grace that God has given to all believers.  Each time I read it I am reminded of my spiritual gifts and the fact that believers are called to be good stewards of them (1 Peter 4:10).  We are called to “bear much fruit” that lasts and our spiritual gifts play a significant role in doing that.  In the parable, a talent equaled about 75 pounds of coinage and would be the equivalent of 15 years of normal wages for one person.  This was an enormous responsibility for each of the servants to bear. The master was leaving on a journey and to one of his servants he gave 5 talents, to another 2 talents, and to another 1 talent according to their ability. What happened when the master came back to settle accounts was this:  The first two servants had put the money to use and were able to double their amounts and present the master with his principal and profits.  But the servant with one talent hid his master’s money and was afraid to use it.  His talent was taken from him and given to the one who had ten talents (there’s eleven!).  My goal with this site is to encourage others to be like the first two servants and take risks in using their spiritual gifts to serve The Lord, while doing the same myself by His grace.

SpiritualGiftsTest.com was founded in 2004 and basically became a clone of the Eleven Talents website.  Within a few years, this site was updated and changed and became much more popular due to its simple name.  I can remember being very excited to see 10 visitors come to the site in a day.  As of today, we can see upwards of 4,000 visitors a day from all around the world!  God is amazing and has blessed us more than we deserve.  Over 1.5 million people have taken our tests (Adult and Youth versions) in the past 10 years.  Another million are projected to take them in the next 12 months.  To God’s glory hundreds of churches, schools, colleges, and ministries use the tests every day either directly on our site, or by downloading our free PDF version of the tests.

Thank you again for visiting SpiritualGiftsTest.com.  We pray it is a blessing to you as you faithfully serve our Lord and Savior Jesus Christ!

Sign up for our newsletter and automatically receive Lesson 1 of Gifted by Grace: An Introduction to the Holy Spirit and Spiritual Gifts. You'll also get a coupon for 20% off the 7-lesson online course. You can't beat that with a stick!